What would you do if your colleagues continually shared offensive and stereotypical racial jokes? How would you respond if the same managers who continually made sexist comments also unfairly critiqued your work contributions, while you watched others being fast-tracked for promotions?  Or if your co-workers questioned your legal status to work,your English skills, or your ability to do your job?

The Tech Leavers Study is a first-of-its-kind national study examining why people voluntarily left their jobs in tech. The Kapor Center and Harris Poll surveyed a representative sample of more than 2,000 U.S. adults who have left a job in a technology-related industry or function within the last three years.

What did we learn?

Workplace culture drives turnover, significantly affecting the retention of underrepresented groups, and costing the industry more than $16 billion each year.

“The culture was toxic. The CEO clearly lacked respect for women. Inappropriate remarks were made about women interviewing for roles in the case that the founder found them attractive. Inappropriate / sexual remarks about women were made in front of his female employees during off sites. (There was) tons of micro-management and lack of trust in the abilities of the women who worked for his company. After I left, all of the other women quit too. It was not a female-friendly company.”
Hispanic, Female, Engineer

While employees across all backgrounds chose to leave their jobs for a variety of reasons, a significant number also cited workplace culture as a driving force behind their decision.

But there is also a silver lining in the data. Findings show that tech companies can take proactive steps to improve workplace culture and retain talent.

Unfairness in the form of everyday behavior (stereotyping, harassment, microaggressions, etc.) is a very real and damaging part of the tech work environment, specifically affecting underrepresented groups, driving turnover, and affecting companies in financial and reputational costs. By focusing on improving workplace culture, we can work to remove the factors that cause valuable employees to leave, and improve the diversity and inclusion of tech workplaces for all employees.

“Several bright individuals were passed over for salary raises and promotions due to them not adhering to the jock culture. Also, gross generalizations were made of groups of people. I was offended by the liberal use of stereotypes and the insistence on making a “welcoming culture” that truly focused on only improving work life for a single demographic.”
Black, Male, Position Undisclosed

Women left their jobs to pursue better opportunities and to leave unfair environments, with differences existing by race.

“There was a culture of harassment, crude behavior towards women, and sexual harassment (by the CTO). The boys club would often be sitting in the CEO’s office drinking whiskey and wouldn’t invite any females. Often my whole team was in there except me. There were so many instances of these comments and this behavior that I became desensitized to it. It made me feel not valued, excluded, with no opportunities for advancement.”
White, Female, Engineer

Women reported a range of experiences from being passed over for promotions to stereotyping and harassment. Women of color often had different experiences than White and Asian women. 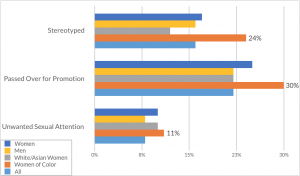 Figure 1. Experiences by Race and Gender

“Although I was at my job for eight years and increased my skills, responsibilities, and output within that time, I never received a promotion or raise because of the “budget.” I later found out that my male coworker of about the same level received two raises and a promotion within that same time period. Toward the last few years, an older man joined the team and he would occasionally (sometimes weekly, sometimes once a month) make comments to me in a joking tone but about my gender, sexuality, or race. Very stereotypical and offensive comments that made the entire office uncomfortable.” Filipino, Female, Engineer

Women want more (equal) pay and better leadership, but equally important are having work-life balance and a respectful environment to work in.

What can companies do? These top 5 factors were identified by women in tech as factors that would have encouraged them to stay with their previous company, all of which are tied to culture and fair treatment:

The sample of women in the Tech Leavers Study included a total of 594 women, 67% were White or Asian and 33% were Black, Latinx, or Native American/Alaskan Native. See the Appendix for more detailed data on the sample.

Underrepresented people of color left their jobs in tech due to unfairness at higher rates than their White and Asian colleagues.

Types of Unfairness Experienced by People of Color

“My employer assumed I knew ebonics because I was Black. She also assumed I would be okay with coded language around affirmative action and implying that people of color get in to schools more easily than white people. I shared this feedback with her during my exit interview.”
Black, Female, Operations

Underrepresented people of color in tech reported specific experiences with stereotyping. For women of color, there were additional barriers at the intersection of race and gender. 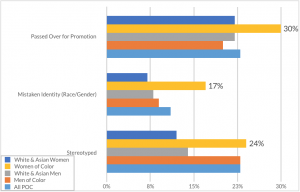 Stereotyping was directly related to turnover for underrepresented people of color.

“There were a lot of rude and condescending employees that treated me like I was less competent. The general culture there also wasn’t diverse, so I struggled fitting in and making friends. Especially working in a company where the majority of employees considered themselves to be politically liberal and inclusive, yet minorities represented a small fraction of the workforce. I felt resentful.”Hispanic, Female, Developer

Underrepresented people of color were seeking both better compensation and job promotions AND more meaningful, balanced work within a positive and inclusive environment.

What can companies do? These top 5 factors were identified by underrepresented tech employees as factors that would have encouraged them to stay with their previous company, all of which are tied to culture and fair treatment:

The sample of underrepresented people of color in the Tech Leavers Study included a total of 598 individuals, 68% were male and 32% female. See the Appendix for more detailed data on the sample.

LGBTQ-identified employees left their tech jobs due to unfairness and dissatisfaction with the work environment.

“I was grossly underpaid, and my experiences of marginalization as a minority was dismissed by my manager, whose general disrespect and maltreatment of me caused high levels of stress and job dissatisfaction.”
White, Trans, Engineer

LGBTQ-identified employees had many of the same experiences with unfair treatment as their peers, but the bullying and public humiliation among this group of employees dramatically stood out. 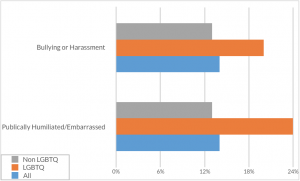 Bullying and public humiliation were directly related to turnover for LGBTQ employees.

“I was treated as an other, excluded, and undervalued in my office. I was ignored, and it was made apparent that I was a ‘diversity hire.’ I was told I was ‘too sensitive.’ I was told that other black and lesbian folks in the office didn’t feel as I did, after mentioning homophobic and racist jokes being spewed in work-only chat channels.” Black, Female, Developer

LGBTQ-identified employees were seeking both better compensation and job flexibility and a more respectful work environment.

What can companies do? These top 5 factors were identified by LGBTQ tech employees as factors that would have encouraged them to stay with their previous company, all of which are tied to culture and fair treatment:

The sample of LGBTQ-identified employees in the Tech Leavers Study included a total of 142 individuals, 67% White or Asian and 32% Black, Latinx, or Native American/Alaskan Native. See the Appendix for more detailed data on the sample.