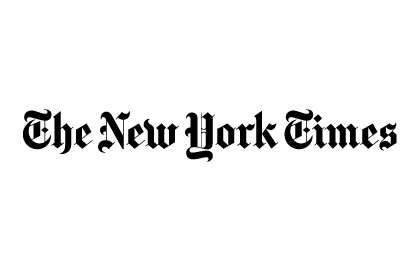 OAKLAND, Calif. — On a recent Tuesday afternoon, a group of well-dressed and soon-to-be well-groomed men sat patiently in the sun outside Temescal Alley Barbershop waiting for $25 haircuts and $30 straight-razor shaves. Some idly pecked at their phones, while others wandered into Standard & Strange, a men’s clothing store that stocks rugged-looking American-made apparel and accessories as well as some carefully selected items from overseas like Tender jeans, which are handmade and dyed by one guy in Britain and sell for $350. (A leather belt thick enough to harness a thoroughbred, also from Tender, will set you back $240.)

Walking around this outpost of cool off Telegraph Avenue, you may forget that you’re just across the bay from San Francisco and not in, say, an oft-cited borough of New York City where style, shopping and food have become major draws.

If so, you wouldn’t be the only one. Style.com recently published an article on Temescal Alley and pronounced it “Williamsburg-esque.” Last year, VegNews, a vegan-oriented website, ran a travel article titled “11 Reasons Why Oakland Is the New Brooklyn,” calling it “the new vegan mecca.” And in an interview with National Journal, the mayor of Oakland, Jean Quan, citing the city’s thriving arts and food scenes, proclaimed, “We’re a little bit like Brooklyn.” (Even HBO has jumped on the bandwagon, setting “Looking” — the gay man’s answer to “Girls” — partly in Oakland.)

Jonathan Hewitt, a 35-year-old London transplant who works as Standard & Strange’s operations manager, and who was describing that same “Manhattan is to San Francisco as Brooklyn is to Oakland” parallel for a recent visitor, was asked if anyone really believed that Oakland was like Brooklyn.

“Abso-bloody-lutely!” he said. “I hate reverting to a cliché like that, but it’s just so true.”

Many people seem to be hoping that the Oakland-as-Brooklyn narrative — or at the very least, the idea that Oakland is a top-flight creative capital — takes off. In April, Visit Oakland, a nonprofit dedicated to increasing tourism in the city, kicked off an ad campaign, logo and hashtag (#oaklandloveit) in an effort to lure visitors.

For many residents priced out of San Francisco, Oakland has come to be seen as a welcoming oasis, crime and civic challenges notwithstanding. “The starving artist will literally starve in San Francisco,” Mr. Hewitt said. “Whereas they can come to Oakland and they might not live in the nicest part of town necessarily, but you can afford to live here.”

What keeps Oakland from being merely a cheaper option than San Francisco, however, is the way the city’s deep cultural roots entwine working-class African-American and ethnic communities, progressive politics, arts, food and more recently technology entrepreneurship. 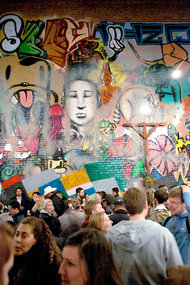 One of the biggest draws at First Fridays, a once-a-month block party in Oakland, is the Telegraph Beer Garden.

“The low burn has gotten hotter in the last year.” said René de Guzman, 50, the Oakland-raised senior curator of art at the Oakland Museum of California. “Oakland is becoming the creative engine of the Bay Area.”

Walking around Oakland, it’s easy to spot unironic displays of civic pride that have nothing to do with defining Oakland in opposition to San Francisco. Many of those signs are found on witty T-shirts and hats from Oaklandish, a local apparel company.

Screen-printed by hand, Oaklandish’s shirts incorporate local iconography like the waterfront cranes and the view from the Bay Bridge, precisely the sort of unpretty nuts-and-bolts infrastructural details some cities may choose not to aestheticize.

The company’s main store, located on Broadway in the heart of downtown, is a celebration of the city, a kind of unofficial gift shop, with a signed poster for the Oakland-set indie film “Fruitvale Station” and double doors leading to its printing facility adorned with a mural that proclaims, “Pride & Roots”; “Local Love.”

Exploring Oakland and some of its many art galleries at a First Fridays festival.

Started as a public art project in 2000, Oaklandish now employs 30 people (nearly half again as many during the holiday season) and has added a second line, There There, focused on other cities like Baltimore and Philadelphia. (Manhattan and Brooklyn are conspicuously absent.) It takes its name from Oakland’s own Gertrude Stein, who famously put down her hometown by declaring, “There’s no there there.”

“People have pulled over U-Hauls to get shirts,” said Angela Tsay, 41, Oaklandish’s chief executive and creative director. “They want to be wearing an Oaklandish T-shirt the first time they walk into their new house.”

Outfitted correctly or not, it’s those new homeowners whom some longtime residents are eyeing warily. Gentrification is as ubiquitous a topic in the cafes and bars of Oakland as pour-over coffee and Google buses are in San Francisco. The fear that rising housing costs will push out working-class families and truly turn Oakland into the next Brooklyn — a shabby-chic bedroom community that feeds white-collar workers into the bustling metropolis next door but doesn’t see much of them or their money — is an ever-present one, especially when reporters from the national news media come calling.

“We’re glad to welcome folks who add value to the city,” said Chinaka Hodge, a 29-year-old poet and screenwriter who grew up in several neighborhoods in Oakland and now splits her time between the city and Los Angeles.

Ms. Hodge and other longtime locals want new residents to understand that while Oakland may be new to them, it’s not new. “We were here,” she said. “We’ve been here. We’ve struggled to survive here, and the moment that it’s cool, not only can we not afford to live here, but our entire history is whitewashed, for lack of a better term.

“I feel in many ways that it’s violent,” continued Ms. Hodge, who is African-American. “We’re being erased from history.”

Ms. Hodge addressed this violence in a tongue-in-cheek music video she made in collaboration with the Bay Area rapper and poet Watsky called “Kill a Hipster.”Set in Oakland (but shot in Los Angeles), it depicts tattooed, badminton-playing newbies as “Walking Dead”-style zombie invaders, their hunger for authentic ethnic foods turning into a grisly feast on authentic ethnic people. Its refrain (taken from the slogan of a T-shirt) says it all: “Kill a hipster; save your hood.”

“I think there are two narratives about Oakland that have existed for my entire life,” Ms. Hodge said.

The first narrative, she’s quick to note, is safety. Driving a reporter by her family’s home, Ms. Hodge was frank as she noted the circumstances of her childhood. “We were easily the richest family in the poor neighborhood,” she said. “When we moved in, this was a crack house, this was a crack house,” she said, pointing across the street from her father’s beautifully restored yellow Victorian with stained-glass windows. “There was police tape across the front of our house. We came home one day, chalk outlines on the front.”

“Now, all white folks live there,” she said.

“The second narrative has been gaining attention over the last few years,” she continued. “It’s the Michelin stars, the cool pop-ups, the Eat Real festival, the uptown story. 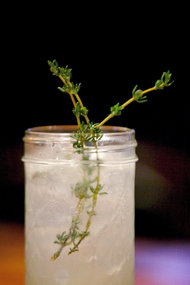 A Cypress Sling, a signature drink at B-Side BBQ.

Those 10,000 new residents were lured to Oakland as part of the 10K Project, a program of urban renewal and revitalization undertaken by Gov. Jerry Brown when he was mayor of the city from 1999 to 2007. The governor has lived in Oakland since 1994 and remains one of the city’s biggest cheerleaders, favorably citing its “edgy quality.”

“I’ve seen the downtown utterly changed,” Governor Brown said in a phone interview. “You have a very lively scene. It’s restored vitality to downtown that hasn’t seen excitement in 60 years.”

That excitement is on full display at First Fridays, a once-a-month block party that grew out of Art Murmur, an open galleries event. During a recent evening, crowds filled a five-block stretch of Telegraph Avenue checking out the galleries, vendors and food trucks. Drum circles, rappers and brass bands vied for attention amid lowrider cars, comedians and models strutting down a makeshift runway to James Brown’s “Say It Loud — I’m Black and I’m Proud.” The scene collapsed boundaries among subcultures: hip-hop, Burning Man and foodie posses mingled promiscuously. At times, the scene seemed to break the constraints of time itself with vendors selling “Free Angela” and “Free Huey” buttons as if the heyday of the Black Panther Party for Self-Defense were still in effect.

The same mixing of crowds can be found at Brown Sugar Kitchen, a soul-food-inflected breakfast spot in West Oakland that opened on Martin Luther King’s Birthday in 2008 and now features long lines around the block most weekends. “It’s like the New York City subway here,” said Tanya Holland, the restaurant’s 48-year-old chef-owner. “You can have the steampunk sitting next to the cop sitting next to the millionaire real estate developer. You see every kind of person here.”

Brown Sugar kitchen, along with B-Side BBQ (also owned by Ms. Holland and her husband, Phil Surkis) and Fauna, an Art Deco bar on Telegraph that adjoins Flora, are just a few of the restaurants that lure San Francisco diners to Oakland. Owned by Dona Savitsky, 43, and Thomas Schnetz, 47, Flora has all the details of a major metropolitan restaurant with none of the airs.

“Being over here is great,” Ms. Savitsky said. “I don’t think we’re trying to be San Francisco. Nor will we ever be.”

One area in which many are hoping Oakland can be both cutting edge and truly supportive of the community is technology. Mitchell Kapor, the software mogul behind Lotus 1-2-3, moved to Oakland’s Jack London Square from San Francisco’s upscale Pacific Heights less than two years ago with his wife, Freada Kapor Klein.

“Career-wise, my talent has been seeing around corners,” Mr. Kapor, 63, said. “We had the feeling we were at the beginning of a big moment in Oakland.

“There’s a sense that everything is possible,” continued Mr. Kapor, whose Kapor Center for Social Impact funds various groups in the Bay Area committed to diversifying the face of technology, like Black Girls Code and Hidden Genius Project. “We’re going to see an explosion of tech in Oakland. It’s the next big area.” Pandora, the music streaming service, has its headquarters here, and there are rumors that Google has considered opening an office in the city.

Mr. Kapor’s enthusiasm is echoed by some of the young tech founders who share a work space in Jack London Square called the Port. Among the developing companies found there is deliberateLIFE, an app-based lifestyle publication that showcases socially responsible products and travel; Shop Pad, a mobile e-commerce platform; and Clef, an identity verification tool that seeks to replace passwords with users’ phones.

The office buzzes with collaborative energy as they work on different projects. Once a week, the team from Clef makes dinner for everyone. They’ve served falafel, ramen, and chicken potpie along with beer and sympathy to end rough days of fund-raising or to fuel late nights of coding.

“Having creative people around has really made a difference as we’ve grown,” said Fay M. Johnson, 31, chief executive and founder of deliberateLIFE. Ms. Johnson was sitting in a conference room with Clef’s Brennen Byrne, 23, and Shop Pad’s Aaron Wadler, 30, near the terminus for a slide that was being installed between floors. “This is a much more collaborative version of what I’d get at an incubator in the city.”

Across the hall is Ms. Johnson’s office, where there’s a blackboard with the outline of the state of California. Written across it in a confident hand is the phrase, “Where Awesome Lives.” An arrow points directly at Oakland.