The company’s first product, still in a prototype and testing phase, is a “smart” smoke detector and air-quality monitor that communicates with and is managed by iOS or Android mobile devices.

The product bears more than a passing resemblance, and a similar idea, to another hardware startup—smart thermostat maker Nest Labs Inc., which Google acquired earlier this year for $3.2 billion.

Formerly known as Canary, Birdi took a new path to seed funding that is becoming increasingly common among hardware startups.

They drafted the concept for their device and affiliated apps at the CleanWeb Hackathon, where they took home a $1,500 prize. Then, they raised additional money, about $73,000 minus 4% in fees, through a crowdfunding campaign on Indiegogo.com.

They also graduated from a hardware-focused incubator, Highway1 (run by PCH International), which mentored founders Justin Alvey and Mark Belinsky on everything from product design to materials science and manufacturing, and gave them $20,000 in convertible debt financing to get started.

Only then did Birdi embark on seed fundraising. They connected with investors online and offline, who could see a well-honed prototype and demand at least among early adopters, Mr. Belinsky said. Having completed the Indiegogo campaign first made seed fundraising relatively easy, he said.

Mr. Calacanis said that besides the “obvious market [demand]” for air-quality measurement, he feels it is his role, as an angel investor, to “believe in” and fund “startups on the brink” of significant traction ahead of when institutional VCs would typically fund a hardware maker.

Since starting up, Birdi has moved from New York to San Francisco, and ditched its original name, Canary, because, Mr. Belinksy said, “canaries die in an emergency. We prefer ‘a little bird told me,’ [as a concept].”

Installed much like a smoke detector in a user’s home, the Birdi detects and sends users alerts to their mobile phones when the air in their homes is thick with pollen, carbon monoxide, pollutants, or if there are signs of a fire.

Users who subscribe to additional services can have the Birdi call a landline to alert other residents–like grandparents, children and others who aren’t likely to use smartphones–if there is a troubling condition in the home. Premium-service subscribers can also have the Birdi automatically call 911 if a fire is detected, say, when they are traveling internationally and cannot be connected by mobile phone. 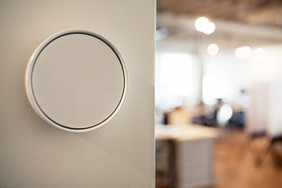 Tech entrepreneur and investor Mitch Kapor said he backed Birdi because of its “dual focus on safety and health” and the “air-quality monitoring aspect” of their product, which he views as an important and competitive differentiator.

Overall, Kapor Capital is interested in connected devices that are “directly improving the well-being of the species,” and can make a “positive social impact.”

The firm regularly scouts deals via incubators including Highway1 and about a half-dozen others, and watches crowdfunding sites for breakout campaigns that could become impressive companies, he said.

Mr. Belinsky says Birdi will use its seed funding to hire full-time staff, move into a new office in San Francisco, and advance their device through various tests with UL LLC(the safety and environmental standards organization). It plans to then manufacture and ship its first complete Birdi systems to early customers in the fourth quarter of 2014.