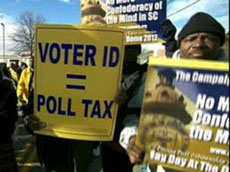 A recent study released by our grant partner, The Brennan Center for Justice, reveals that 500,000 Americans could face difficulties in obtaining a government-issued photo ID in order to vote. In the first comprehensive study of its kind, the Brennan Center exposes the many challenges to attaining a free photo ID for eligible voters who do not have one. Looking at 10 states with voter ID laws–Alabama, Georgia, Indiana, Kansas, Mississippi, Pennsylvania, South Carolina, Tennessee, Texas, and Wisconsin–they found that: