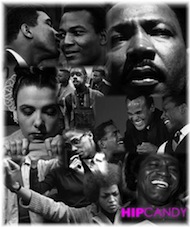 I love my job.  I work with an amazing and diverse lot of social justice-oriented, thoughtful, socially-conscious colleagues.  Never before have I worked in a place that allowed for both a recognition of Black History Month and a celebration of the rich culture and contributions made by black people in America.  Last Monday, the different entities that make up the Kapor Center at 543 Howard came together to enjoy some great soul food and to participate in an open-mic lunch event where staff of all backgrounds read excerpts of their favorite works by African Americans.  We had quite a variety of works represented, including an original work from our CEO, Cedric Brown, and another original piece by Trevor Parham, our Creative Director.  I wanted to share the wonderful list of pieces from the open mic with all of you.

Believe in the power of truth… Do not allow your mind to be imprisoned by majority thinking. Remember that the limits of science are not the limits of imagination.
– Dr. Patricia E. Bath

I don’t measure America by its achievement but by its potential.
– U.S. Representative Shirley Chisholm

I am the son of a black man from Kenya and a white woman from Kansas. I was raised with the help of a white grandfather who survived a Depression to serve in Patton’s Army during World War II and a white grandmother who worked on a bomber assembly line at Fort Leavenworth while he was overseas. I’ve gone to some of the best schools in America and lived in one of the world’s poorest nations. I am married to a black American who carries within her the blood of slaves and slaveowners – an inheritance we pass on to our two precious daughters. I have brothers, sisters, nieces, nephews, uncles and cousins, of every race and every hue, scattered across three continents, and for as long as I live, I will never forget that in no other country on Earth is my story even possible.
– President Barack Obama

Hard-working people, and poor, most of them, in worldly goods–but how rich in compassion! How filled with the goodness of humanity and the spiritual steel forged by centuries of oppression! There was the honest joy of laughter in these homes, folk-wit and story, hearty appetites for life as for the nourishing greens and black-eyed peas and cornmeal bread they shared with me. Here in this little hemmed-in world where home must be theatre and concert hall and social center, there was a warmth of song. Songs of love and longing, songs of trials and triumphs, deep-flowing rivers and rollicking brooks, hymn-song and ragtime ballad, gospels and blues, and the healing comfort to be found in the illimitable sorrow of the spirituals.
– Paul Robeson