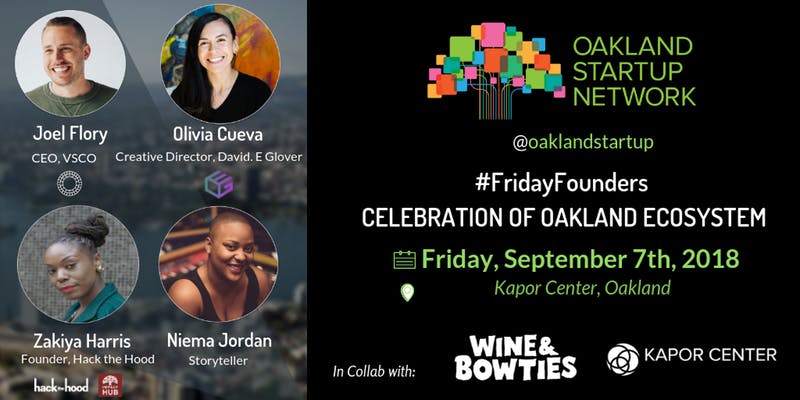 Join us for our September First Friday Fireside Chat to celebrate Oakland ecosystem. For this special edition, we have partnered with local organization Wine & Bowties to showcase local artisans from the community and bridge the gap between music, culture, and tech.

Wine & Bowties is an art and culture platform based in Oakland. Curating experiences in the form of concerts, festivals, panel discussions and film screenings, the goal is to build community through the celebration of creativity and culture.

Joel Flory is the Co-Founder and CEO of VSCO. A natural leader, Joel was integral in growing VSCO to 45+ million monthly active users, and securing over 70 million in funding. Joel understands the complex nature of building and sustaining a brand in the creative industry.

Prior to founding VSCO in 2011, Flory worked for more than a decade as a professional photographer. The initial idea of the company started with an effort to emulate film photography and has continued to grow with the increasing popularity of mobile photography. Under Flory’s leadership, VSCO has moved past its initial focus on photo editing tools to offer a premium subscription service, a curated AI-powered Discover feature and a service which connects brands with high-quality photographers around the world.

Olivia Cueva is currently the Creative Director at the David E. Glover Education & Technology Center. She received her Master’s from the Interactive Telecommunication Program at NYU. Prior to that she was creating engaging media and arts programming for youth at Youth Radio and BAMFA and traveling the country recording oral histories with StoryCorps. Her 10+ years experience as a radio journalist has been featured on NPR.

Zakiya Harris is a Changemaker, working at the intersections of entrepreneurship, education & creative transformation. Zakiya is a co-founder of nationally recognized projects Impact Hub Oakland, Grind for the Green, Hack The Hood, Earthseed Consulting, and a Fellow of Green For All and Bold Food.

As a programming strategist for Impact Hub Oakland, she facilitates support and scholarships to mission-driven entrepreneurs dedicated to accelerating possibilities for a better world. She is also the Chief Education Officer of Hack the Hood, a technology program for low-income youth of color and winner of the 2014 Google Impact Challenge.

Zakiya’s fourteen years of experience in arts and equal access movements includes a combination of management, teaching and presenting at Green Festivals, TedxDenver Education, Global Exchange and the Youth Leadership Institute, Toyota Motors, Inc., the US Department of Agriculture, the US Department of State Bureau of Cultural & Educational Affairs and the NAACP National Convention. She served as the first African-American Regional Director of the San Francisco Green Festival, received the Ella Baker Center for Human Rights Future Leaders award. She also recently accepted the Tutorpedia Foundation Award for Personalizing Education.

Zakiyah holds a B.A. in Political Science and History from Rutgers University, and attended New College of Law before leaving to pursue her lifelong passion of teaching. Applying her performance arts talents as a dancer, vocalist and actor, Zakiya has taught culturally and creatively-driven classes to elementary, high school, college students and adults.

Niema Jordan is a writer, director, and producer from Oakland, Calif. She began her career in media as an undergraduate at Northwestern University’s Medill School of Journalism studying magazine writing and editing. She went on to be a health editor at ESSENCE magazine and to write for print and digital publications.

She has worked on social media strategy for entrepreneurs, produced a music festival, and serves on the board of directors for Camp Reel Stories.

Niema received her Master of Public Health and Master of Journalism from University of California, Berkeley. Her thesis film, Oasis, won the Spike Lee Student Filmmaker Award at the 38th Denver Film Festival and was an official selection at the APHA Global Public Health Film Festival.