It seems that the tech world is passionately grappling with issues of race, gender, inclusion, exclusion and meritocracy.  We are thrilled that the conversation is surfacing frequently.  The notion of “confirmation bias” is sliding into our awareness—i.e. that we seek information that confirms our previously held beliefs; we used the term in our recent piece and it showed up in a Gawker piece about the same time.

A quick glance at some local and national headlines from the past week are illustrative.  Two stories — along with our own recent Op-Ed and profile pieces in the San Francisco Chronicle — help us paint the picture.

First was a multi-part piece “Even Odds” about the status of black men and boys in Oakland, where we live and work.  While we vigorously applaud the critical efforts of our community allies featured in the series – the African American Male Achievement Initiative and the 100 Black Men of the Bay Area Community School – we’re less enthused about the framing of the series. The tag line read “Being male and black in Oakland means being about as likely to be killed as to graduate from high school ready for college.”  As we pointed out in our Op-Ed piece shortly thereafter, not only is this statistic inaccurate, but this type of sensationalism feeds the fear of mainstream (read: white) America.  It feeds the fear of “neighborhoods like Oakland,” the fear of black men, and further emboldens many of those with power and resources to disengage from the lives of communities of color entirely.  While crime in our city is undeniable and urgently needs addressing, “Oakland” becomes a synonym for all things unsafe and undeserving of belonging in the mainstream. 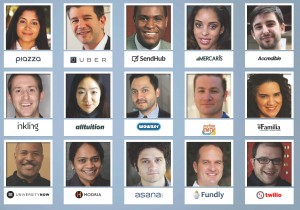 Some of the entrepreneurs in the Kapor Capital portfolio

The second was a piece in Gawker’s Valleywag on Silicon Valley’s propensity to misuse “culture fit” in hiring practices.  While a critical element in hiring, “culture fit” has become the new shorthand for ‘we don’t recognize that talent can come from a person like you or of your background’. The converse is that job candidates and entrepreneurs seeking funding who are recognizable to those with decision-making power have a significant leg up in this race.  The author of the piece, Nitasha Tiku, writes:

“Even Y Combinator’s Paul Graham copped to that confirmation bias, telling the NYT: ‘I can be tricked by anyone who looks like Mark Zuckerberg.  There was a guy once who we funded who was terrible.  I said How could he be bad? He looks like Zuckerberg!“

Hilarious actualization of bias, isn’t it?  Take into account that Y Combinator is seen as one of the premiere accelerators for tech start-ups in the valley and that since its founding in 2005 it has funded over 550 startups.  Apparently that includes exactly zero African-American women entrepreneurs.  Zero.  (They aren’t alone—neither has TechStars nor Founders Institute, which motivated Kathryn Finney to start Focus100.)

To top that off, PG (as he is known) was taken to task on Twitter yesterday afternoon for stating that part of Y Combinator’s evaluation criteria for success includes the following thought:

“One quality that’s a really bad indication [for selection] is a CEO with a strong foreign accent. I’m not sure why. It could be that there are a bunch of subtle things entrepreneurs have to communicate and can’t if you have a strong accent. Or, it could be that anyone with half a brain would realize you’re going to be more successful if you speak idiomatic English, so they must just be clueless if they haven’t gotten rid of their strong accent. I just know it’s a strong pattern we’ve seen.”

Regardless of whether it’s ‘positive bias’ (e.g. you look like an entrepreneur) or negative stereotyping (e.g. you look scary and I’d better cross the street), bias is an enemy of fairness and meritocracy.  It’s a shortcut which we all take to sift through too much information, but when we take shortcuts, we need to fully understand what scenery and hidden gems we have also removed from consideration.

Very recently, we each had an experience of attending a tech conference focusing on inclusion of people of color where a Caucasian male partner of a prominent firm was speaking.  At both Latino2 and the Platform Summit, someone proudly described Y Combinator and Kleiner Perkins as “colorblind”, “gender blind” and/or “agnostic on race and gender.”  In each instance, one of us took on the speaker, pointing out that aspiration and actuality are different.  To ignore biases, however subtle or unintentional, is to allow them to flourish.

At the Kapor Center for Social Impact, our goal is to provide data and venues and examples of the advantages for all of us when biases are surfaced and tech companies compete vigorously to mitigate them.  We look forward to the day when one of the young African American boys profiled in the San Francisco Chronicle series ends up in Y Combinator, or better yet, becomes a partner.  Those odds might be stunningly worse than the low rates of college-ready high school graduates.